I've got another dev tool that I wanted to pass along:

A few months ago, Jon Skeet posted a tweet about a new tool he was using called NCrunch.  Since then, I've been playing with the tool and working with the author to resolve some of the issues (here and here) that were blocking it from working smoothly in the my environment.  I believe it's now to the point where my coworkers who wish to take advantage can do so and where I can promote it's use to the world.

NCrunch, at its core, is a TDD extension for Visual Studio.  It will run your unit tests in the background and provide real-time unit test results (no need to even save your file – runs as you type) by way of color-coded dots to the left of each line of code. (Green = passing, red = failing, black = not covered).  It will provide details for exceptions that are thrown and many other cool features.  This will allow you to get immediate feedback if changes you are currently typing break/fix any unit tests.

There's a very good demo video on the NCrunch homepage (about 6 minutes long) that I think is worth watching to get a feel for what the tool can do.

Key features (or at least "My favorites"):

There are a couple of things to note: 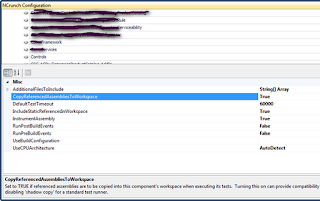 This entry was posted in Tools , Code Analysis , TipsAndTricks .